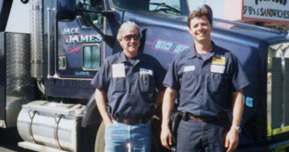 Jack James introduced towing to his Shell gas and service station in order to bring additional work to his garage in 1955. It was from this service station on Castro Valley Boulevard that Jack James Tow Incorporated was born. Upon Jack’s retirement in 1976, John and Lorraine Farias purchased the business, which by then had its own street address. When John passed away, Lorraine sold the business in 1990 to Dick and Barbara Johnson who began to build for the future. In 1996 Dick teamed up with his son Dale to establish Jack James as a premier full service towing and transport company. Although Dick passed early, in 2003, the years he mentored and worked with Dale are cherished. Jack James Tow Incorporated continues to thrive as a family owned and operated business, including the addition of a second location in 2007.

Today, Jack James Tow Incorporated is a leader in the industry with offices and yards in both Hayward and Fremont. Jack James is able to respond swiftly to simultaneous calls of any size with their well-equipped fleet. As a testament to the service level provided, Jack James services 11 Police Departments. Companies who choose Jack James as their primary tow and transport provider appreciate their ability to move what’s needed when needed with the safest equipment operated by professionally certified drivers. Highly regarded for service excellence throughout Hayward, Fremont, Union City, Castro Valley, Oakland, San Leandro, San Jose, San Mateo, Pleasanton, Livermore, and the greater SF Bay Area. Jack James remains dedicated on delivering customer satisfaction.